For the third year in a row, the Banter bandwagon heads southwest to Dingle and takes up residence in Foxy John’s pub and hardware shop for this year’s Other Voices’ event. As always, it’s a pleasure to head to Dingle so big thanks as always to the Other Voices’ team for the invite. 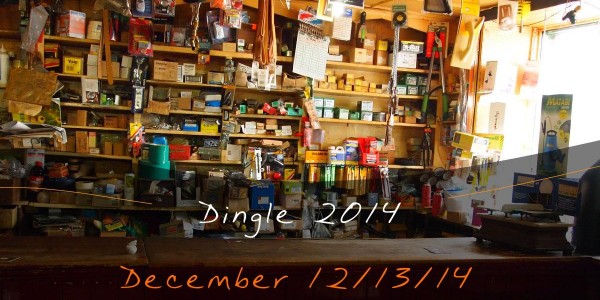 On Saturday and Sunday December 13 and 14, we’ll be hosting a rake of one-on-one interviews with some fascinating folks from the worlds of sport, media, technology, music, art, film, design and literature.

Paul Galvin – believe it or not, this is the first visit from a Lixnaw man to Banter. Paul Galvin surely needs no introduction to the Foxy John’s faithful, a colourful player of great passion and skill who won a rake of All-Irelands for his county. We’ll talk about his recently published book In My Own Words, his life on the pitch, fashion, hip-hop and much more besides.

Paddy Cosgrave – the founder of the Web Summit talks about what it takes to grow an event from zero to 22,000 in a few years and what comes next for the Summit. Before anyone starts, please note that there is no wi-fi in Foxy’s.

Bill Malone – meet Mr RTE2. Bill Malone is the channel controller, the man charged with ensuring that the TV channel kicks ass, broadcasts shows with bite and appeal and continues to keep Irish 15-24 year olds tuning in. We’ll talk to Bill about his life in TV, his role at the top of the RTE2 tree and what’s next from the station which has provided a home for Damo & Ivor, Connected, Drunk, Republic of Telly and, yes, Other Voices.

Joe Caslin – if you’ve seen the large-scale murals of young men on the walls of various towns and cities around the country this year, you’ve seen the work of Joe Caslin. He will talk about how Our Nation’s Sons brings marginalised young men in from the shadows to remind us of their existence

Nóirín Hegarty – formerly the editor of independent.ie and The Sunday Tribune, Nóirín is now managing destination editor at Lonely Planet in London. As well as retracing her steps and retelling her adventures in the Irish media ecosystem, she’ll talk about Lonely Planet and what’s ahead for travel writing

Gavin Sheridan – the Cork journalist and blogger has done much to promote the idea of using existing laws and regulations to shed light on how power is used in this country. Co-founder of TheStory.ie and KildareStreet.com and formerly the director of innovation at Storyful, he’ll talk at Banter about the tenacity and patience required to bring transparency to how our government operate.

Delorentos – what’s it like to be in a band in 2014 and what does it take to ensure that band keeps on keeping on? Kieran McGuinness and Nial Conlan from the Choice Music Prize-winning Delorentos join us to talk about the highs and lows of keeping a band on the road and the ins and outs of getting four albums released.

Rob Doyle – author of Here Are The Young Men, Dublin Rob Doyle comes to Dingle to talk about the influences and inspirations behind his debut novel. A tale of four youngsters in the months between Leaving Cert exams and results, Here Are The Young Men is a fascinating, enthralling and moving read about Irish youth and Irish ways.

Banter kicks off each day at 2pm sharp and will run until 6pm-ish. There will also be very special musical guests each day (really special) as well as ticket giveaways. We’ll see you there.