As the nights draw in and you reach for a heavier jacket as you head out the door, Banter returns to the Twisted Pepper for the autumn/winter season.

We’ve decided to do something a little different this year and have a season of Banters planned for the coming months called Living for the City. What we hope to do is take a look at various issues around living, working and playing in the capital city in the 21st century. Some, of course, will be obvious and some of them won’t be some obvious, but it’s a set of topics we hope will set off a few conversations in the coming months, especially ahead of next year’s local elections.

Our first one is On Your Bike and it will look at how the most user-friendly transport system for this city is probably one which involves two wheels. But despite the huge take-up of the Dublin Bikes scheme and the increased number of cyclists on the streets (streets, as opposed to footpaths) thanks to the Cycle to Work scheme and other iniviatives, cycling continues to be seen as a minority interest. As if that wasn’t bad enough, cyclists have to contend with bike thieves, over-zealous policing, the bike lanes to nowhere and getting called “the spawn of the devil”. Are cyclists really the villains some paint them to be or are we overlooking what pedal power can do for transforming the city? 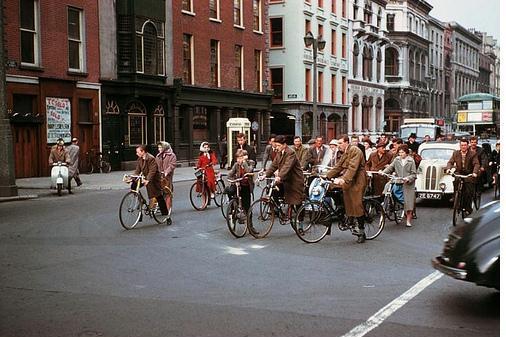 Cyclists waiting for the green light on Dame Street in 1960. Photo by Old Dublin Town

On Your Bike will take place at the Twisted Pepper (Middle Abbey St., Dublin 1) on Wednesday September 25. Doors open at 7.30pm, the cycling gets underway at 8pm and the discussion will be followed by an audience Q&A. Admission is free and the sign-up form for the night is here.