What are the rules for being a man?

But Robert Webb has been wondering for some time now: are those rules actually any use? To anyone?

Looking back over his life, from schoolboy crushes (on girls and boys) to discovering the power of making people laugh (in the Cambridge Footlights with David Mitchell), and from losing his beloved mother to becoming a husband and father, Robert Webb considers the absurd expectations boys and men have thrust upon them at every stage of life.

Hilarious and heartbreaking, How Not To Be a Boy explores the relationships that made Robert who he is as a man, the lessons we learn as sons and daughters, and the understanding that sometimes you aren’t the Luke Skywalker of your life – you’re actually Darth Vader. 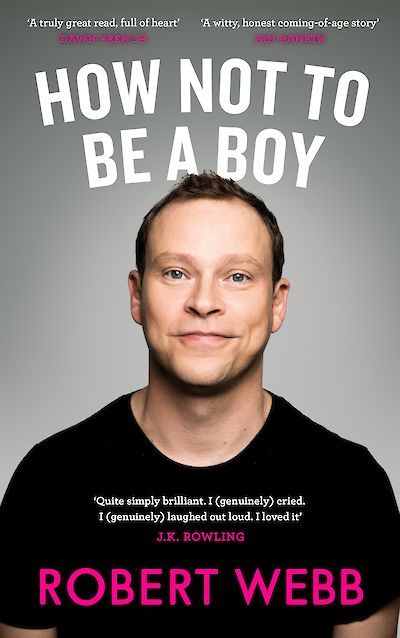 Robert Webb has been a male for his whole life. As such, he has been a boy in a world of fighting, pointless posturing, and the insistence that he stop crying. As an adult man, he has enjoyed better luck, both in his work as the Webb half of Mitchell & Webb in the Sony award-winning That Mitchell & Webb Sound and the Bafta award-winning That Mitchell & Webb Look, and as permanent man-boy Jeremy in the acclaimed Peep Show. He also played Bertie Wooster in the acclaimed West End run of Jeeves and Wooster in Perfect Nonsense. Robert has been a columnist for the Daily Telegraph and the New Statesman, and now lives in London with his wife and daughters, where he continues trying to be funny and to fumble beyond general expectations of manhood.

“Quite simply brilliant. I (genuinely) cried. I (genuinely) laughed out loud. It’s profound, touching, personal yet universal … I loved it”
J.K. ROWLING
“Takes us deftly from hilarity to heart-stopping hurt … A truly great read, full of heart”
DAWN FRENCH
“Written with wit and clarity, How Not to Be a Boy is a funny, rueful, truthful book. I enjoyed every page”
STEPHEN FRY
“A witty, honest coming-of-age story with a subtext that tackles masculinity and manhood. Webb has a storytelling skill many would kill for”
IAN RANKIN
“Timely and candid, told with great humour, warmth and compassion. A much-needed contribution to the vital conversation about the damage gender can do”
JUNO DAWSON

The details: Banter and Aiken Promotions present Robert Webb in conversation with Sinead Gleeson about his new book How Not To Be A Boy and other matters on Saturday September 16 at Vicar Street, Dublin. Doors open at 11.30am and the interview begins at 12 noon sharp. The interview will be followed by an audience Q&A and a book signing. Tickets go on sale on Friday at 9am.